Rogue Carver on the Loose in Italy

Part 11, Death in Pisa, Corpses Under Foot – The Gravestones 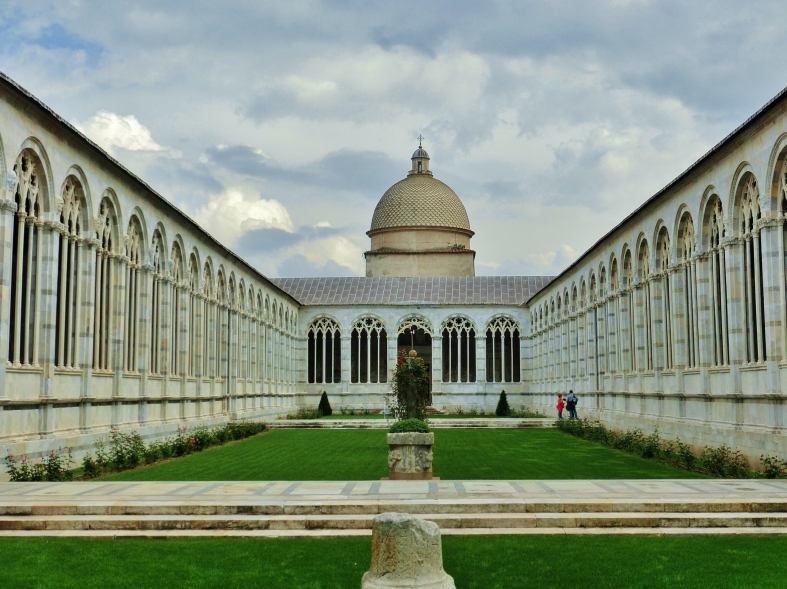 For those with a weak disposition for images of death, of corpses, of the grieving and suffering and emotional turmoil associated with the subject you may wish to skip the next three editions of Rogue Carver on the Loose as this is precisely the topic on which I will be dwelling. I mention this because I am about to showcase the incredible sculpture that I discovered within the walls of the Camposanto on a return visit to Pisa. 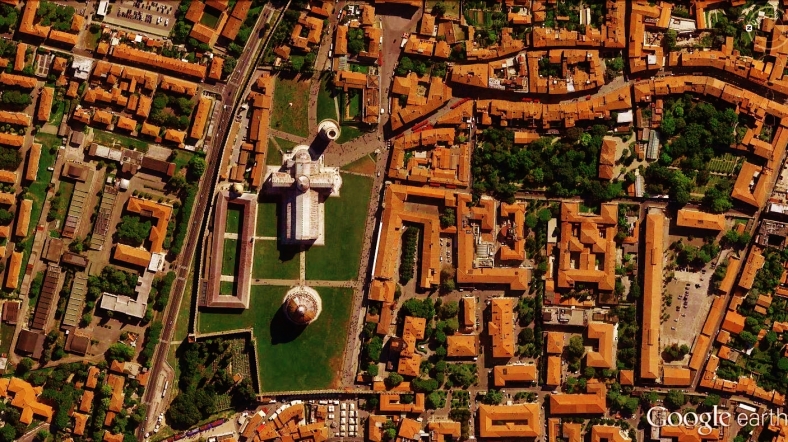 But first, so as to set the scene, here is a summary of Wikipedia’s article on the subject:

“Camposanto Monumentale The Campo Santo, also known as Camposanto Monumentale (“monumental cemetery”) or Camposanto Vecchio (“old cemetery”), is a historical edifice at the northern edge of the Cathedral Square in Pisa, Italy.”Campo Santo” can be literally translated as “holy field”, because it is said to have been built around a shipload of sacred soil from Golgotha, brought back to Pisa from the Fourth Crusade by Ubaldo de’ Lanfranchi, archbishop of Pisa in the 12th century. 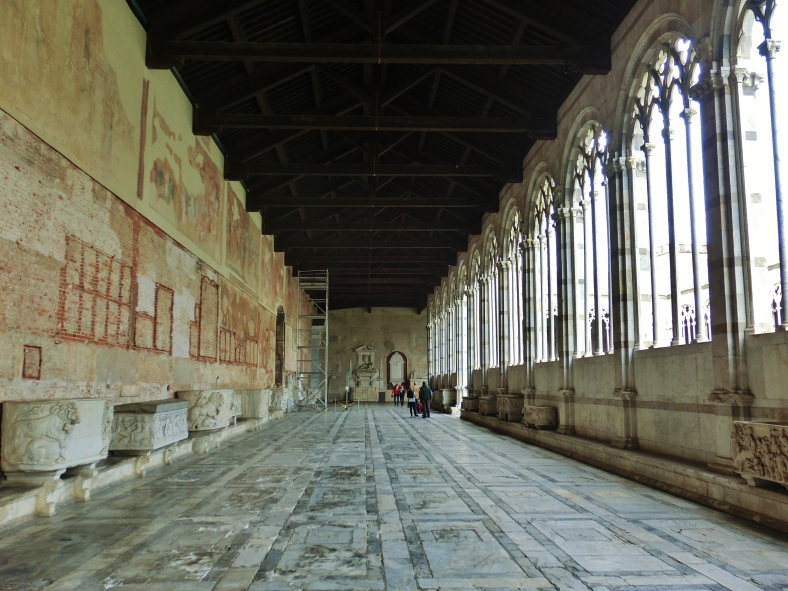 A legend claims that bodies buried in that ground will rot in just 24 hours.  The construction of this huge, oblong Gothic cloister was begun in 1278 by the architect Giovanni di Simone.  He died in 1284 when Pisa suffered a defeat in the naval battle of Meloria against the Genoans. The cemetery was only completed in 1464.  It seems that the building was not meant to be a cemetery, but a church called Santissima Trinità (Most Holy Trinity), but the project changed during the construction.  The outer wall is composed of 43 blind arches.  Most of the tombs are under the arcades, although a few are on the central lawn.  The inner court is surrounded by elaborate round arches with slender mullions and plurilobed tracery.

The cemetery has three chapels.  The oldest ones are the chapel Ammannati (1360); and the chapel Aulla, were there is an altar made by Giovanni della Robbia in 1518. In this chapel we can see also the original lamp that Galileo Galilei saw, in his time, inside the cathedral and that was shortly replaced by the bigger one we can see now.  The last chapel was Dal Pozzo, commissioned by archbishop of Pisa Carlo Antonio Dal Pozzo in 1594; it has an altar dedicated to St. Jerome and a little dome.  In this chapel in 2009 were transferred the relics of the Cathedral:  the relics include among the others eleven of the twelve Apostles, two fragments of the True Cross, a thorn from the Crown of Thorns of Christ and a small piece of the dress of the Virgin Mary.

The walls were once covered in frescoes; the first were applied in 1360, the last about three centuries later.  On 27 July 1944, a bomb fragment from an Allied raid started a fire. Due to all the water tanks being controlled, the fire could not be put out in time, and it burnt the wooden rafters and melted the lead of the roof. The destruction of the roof severely damaged everything inside the cemetery, destroying most of the sculptures and sarcophagi and compromising all the frescoes.

After World War II, restoration work began. The roof was restored as closely as possible to its pre-war appearance and the frescoes were separated from the walls to be restored and displayed elsewhere.  The restored frescoes that still exist are gradually being transferred to their original locations in the cemetery, inside the cemetery, to restore the Campo Santo’s pre-war appearance.” 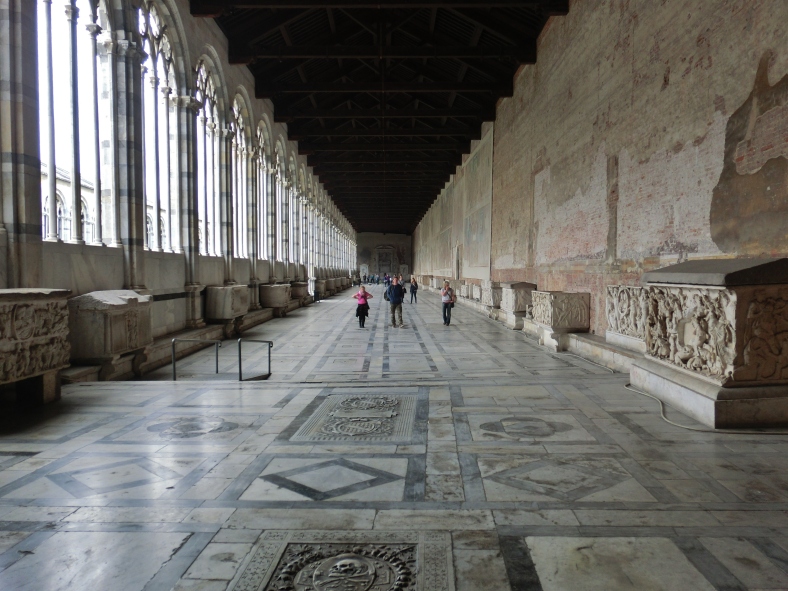 Stepping inside the Camposanto I felt the air cooled by a soft breeze and was immediately transported back in time to a world wherein life and death were essentially intertwined – inseparable one from the other.  In an age when religion was ever-present in the lives of, well everyone.  When wars, plagues, famine, sickness, public torture and executions were part and parcel of people’s daily lives, the idea of being squeamish on the topic of death would have struck people as rather odd.  But in these days of closed coffin funerals, warnings regarding video footage containing ‘graphic imagery’, and movies that seek to entertain with the phony thrill of pretend violence whereby no one is actually really hurt, let alone killed, it is as well to remember that until very recently death was an ongoing and very real specter in everyone’s lives. 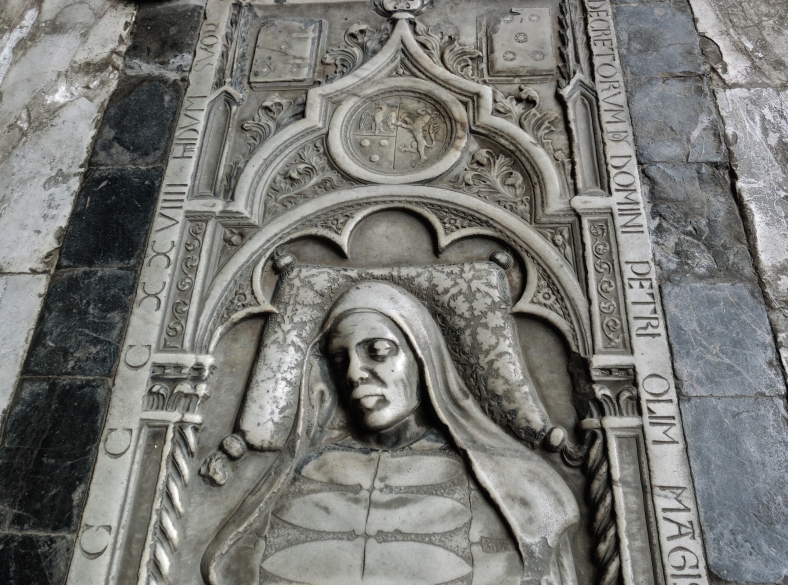 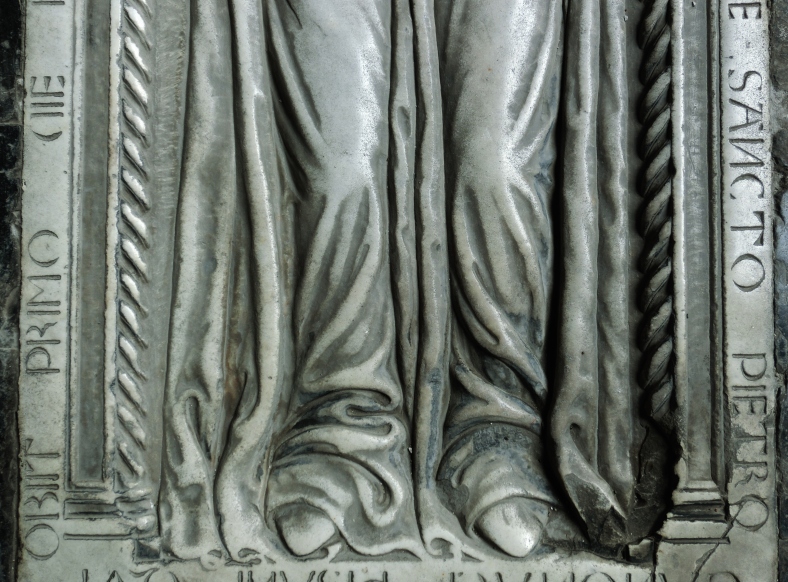 But whereas many of us today assume death to be a termination of life, Europeans of the middle ages clearly had other ideas, to them death was simply the final stage of life, a waiting room from which they would greet the coming resurrection and ultimately their passage to heaven – their decaying bodies literally rising from the ground and ascending to heaven.

‘Everlasting life’: John 3:16:16 For God so loved the world, that he gave his only begotten Son, that whosoever believeth in him should not perish, but have everlasting life.

In fact ‘waiting room’ pretty much describes the scene I stepped into as my eyes slowly grew accustomed to the dim light of the Camposanto and I gradually came to realize that I was in fact surrounded by sarcophagi and gravestones concealing the corpses of those prominent and important enough to have their earthly remains interred in such a prestigious location.

To be honest I felt slightly overwhelmed by the spectacle on my first tour of the building, I simply let it all wash over me.  The only way I could comprehend the mesmerizing array of sculpture was to break it down into its three components: the gravestones, the sarcophagi, and the statuary – which is the order in which I intend to present my Camposanto review over Parts 1, 2 & 3.

It’s odd to realize that the earthly remains of hundreds of human beings reside just a few feet below the soles of your feet – placed there with the ‘certain faith and hope of eternal salvation’. 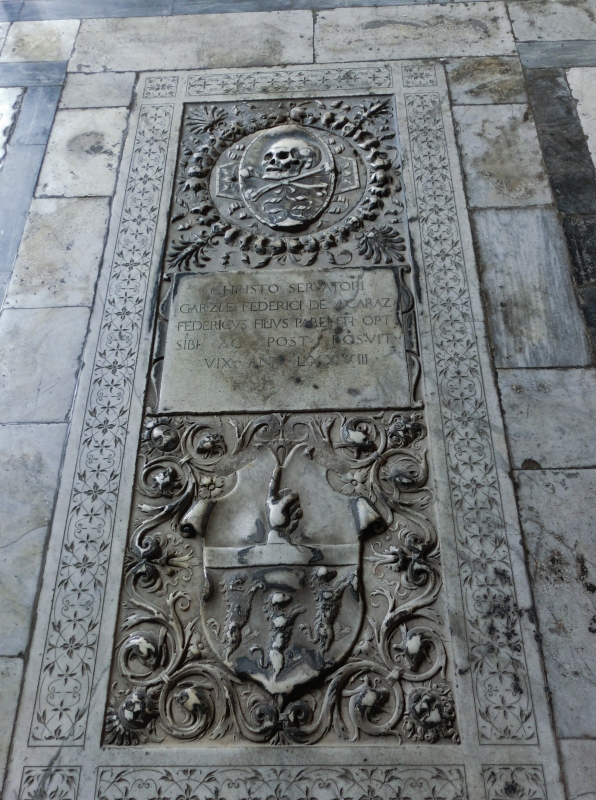 More than a few carvings presented images of skeletons, corpses, of flesh eating worms, of decay, bones and of course skulls – chiefly the grisly image of the skull and crossbones more associated these days with comic pirates. 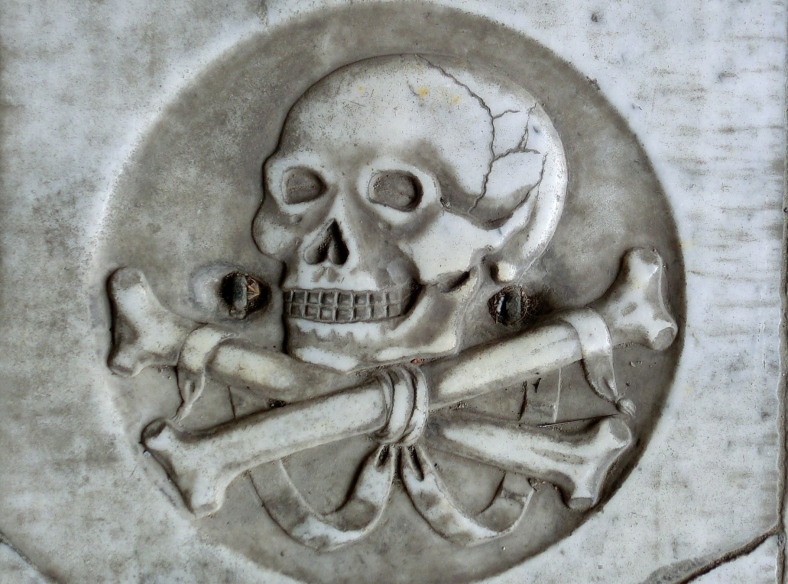 Given the sheer size of the place it took a considerable amount of time to saunter my way around all four sides of the cloister, head bowed, slowly shuffling my way along engrossed in the stone scroll unfolding before my eyes. But just when I was beginning to think of these worn but clearly recognizable images as relics of the past I stumbled across a scene that brought proceedings immediately into the present.

I had already noticed that the gravestones were grouped into timelines that radiated out from the main entrance close to the cathedral, at the far side from which the most recent additions lay huddled together as if for mutual protection, and a few of these dated back to the mid nineteen hundreds, one or two even spilled over into the last century.

Retracing my steps I was quite shocked to realize that in the time it had taken me to make my slow journey potted flowers had mysteriously appeared over three of the graves. No sign of mourners, no explanation, just a single plant on each of the graves.  I’d heard no sound of a ceremony, caught no whisper of words, no one had lingered, but someone had clearly set these flowers over gravestones that meant something to them.  All of a sudden I was made aware once more of the cooling breeze as the past was brought transported into the present. 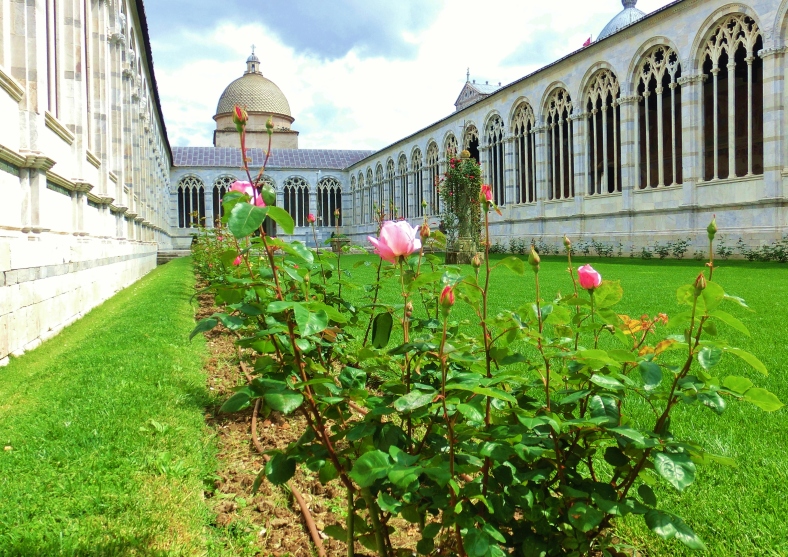 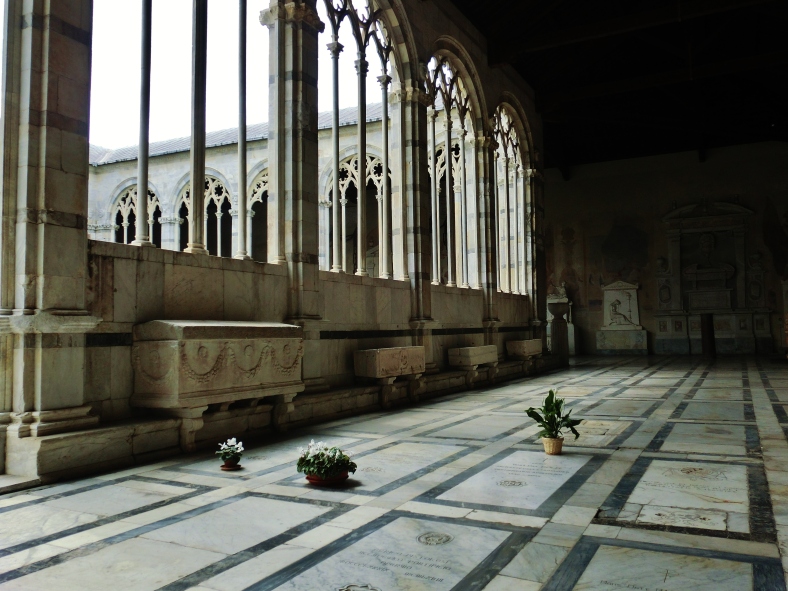 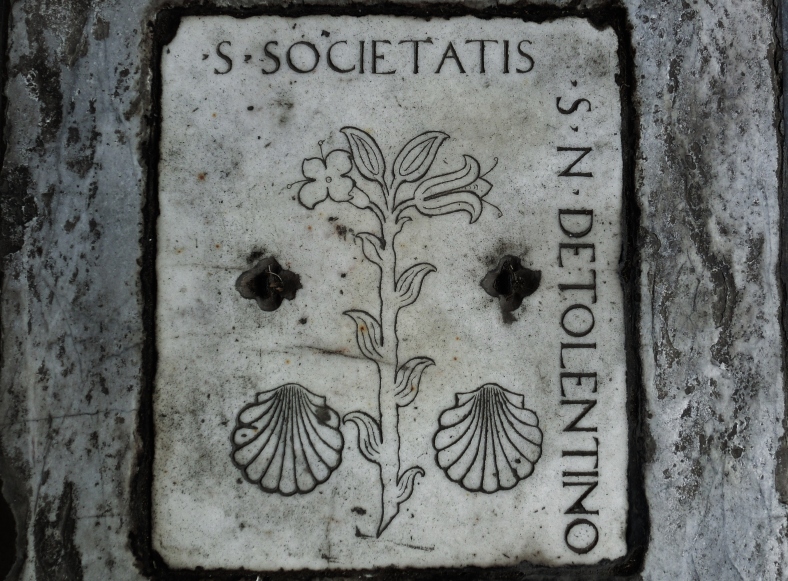 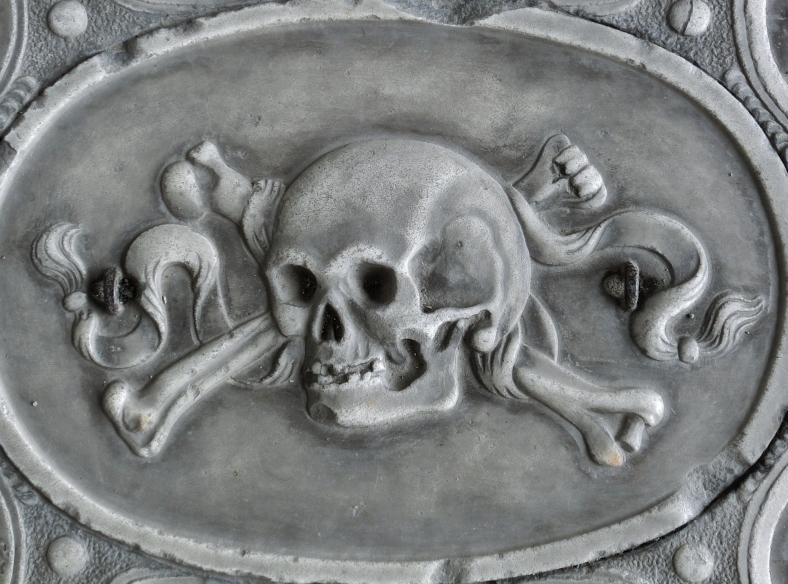 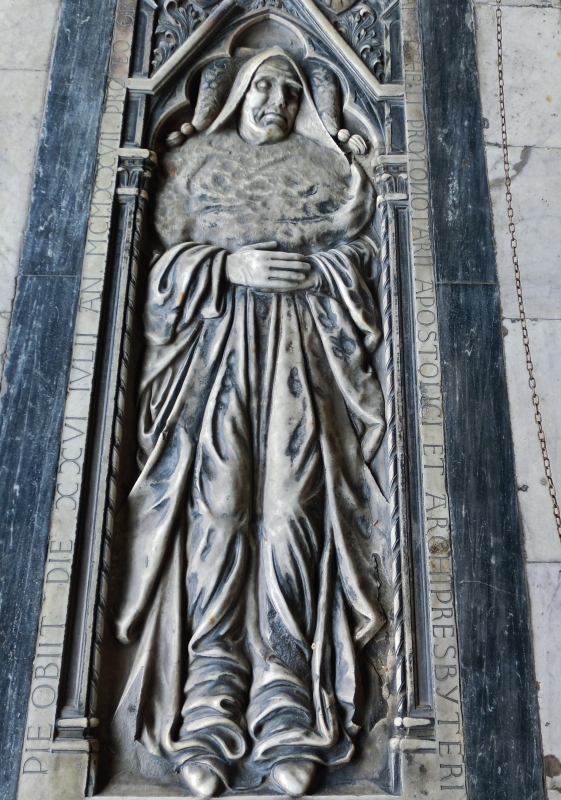 Please feel free to share my online pictures, they are here for you to enjoy however you wish.

4 thoughts on “Death in Pisa: The Camposanto Gravestones”

This site uses Akismet to reduce spam. Learn how your comment data is processed.

Please Click on The Gallery Tabs in The Banner to View My Work.  I Hope You Like It.

But don’t forget that most of my ten thousand-plus photographs are large format, so please click on any image and ENLARGE TO SEE THE WHOLE PICTURE 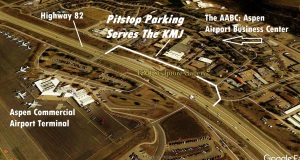 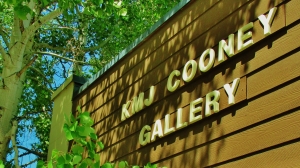 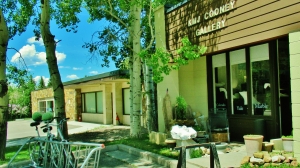 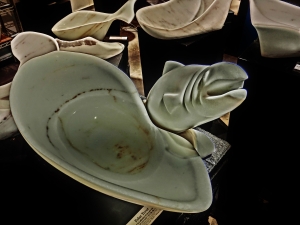 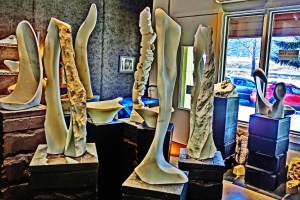 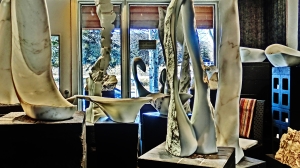 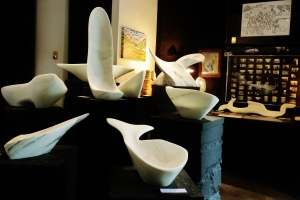 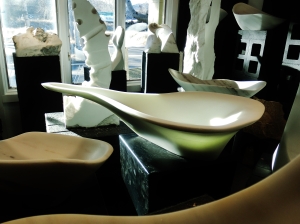 Discover The KMJ on your next trip to Aspen 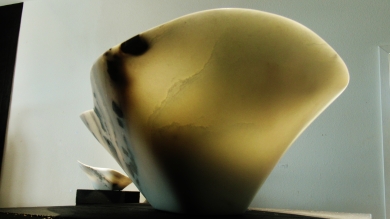